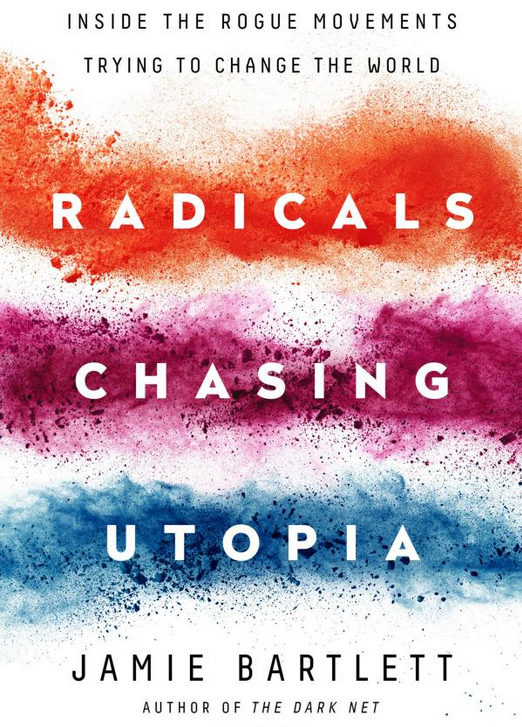 “Radicals Chasing Utopia could influence you to chase after some of these utopian organizations and ideas, or make you want to flee from them just the same.”

Jamie Bartlett is back, following up his stellar debut The Dark Net with something equally enlightening and unnerving for the modern age. Radicals Chasing Utopia is an in-depth look at a selection of outlying organizations that all feel they hold the key to the future, or at least the futures they envision. These radicals range from unconventional to unhinged, brilliant to bat-shit crazy. They’ve convinced themselves that their extreme ideas have merit, but hold back judgment and hear them out, they just might convince you, too. Bartlett, ever the knowledgeable guide through murky political and technological waters, introduces us to the radicals he investigates with these words:

"It's the hubris of every generation to think that they have arrived at the best way of living. But all the things we now take for granted, all the modern wisdoms we hold to be self-evident, were once derided as dangerous or foolish radical thinking."

Seven groups are on the target list, with a chapter dedicated to each; transhumanists, European nationalists, a psychedelic society, an Italian Internet-based political party, a functioning free-love commune, a collection of climate change activists, and a tiny new country founded on Libertarian principles.

Bartlett embeds himself with these groups and approaches each with a commendable balance of genuine open-mindedness and healthy skepticism. He’s the kind of writer that can sift through complexities to find value in supposedly absurd or dismissed ideas, be highly critical while avoiding cynicism, and also be skeptical of skeptics themselves.

A merchant of information, Bartlett offers readers a great deal within these pages. If knowledge is what you’re after, you won’t be disappointed. Each organization is outlined, infiltrated, dissected, and reviewed. Background and applicable history, multiple points of view, pros and cons are all presented.

Bartlett’s writing is smooth and authoritative with a noticeably friendly tone. He doesn’t miss a beat, keeping you constantly interested, and even allows for the occasional good laugh. When subject matter gets complicated, the author thankfully doesn’t, breaking down and filtering the material so readers can digest it more easily.

These “radicals” often flourish, but sometime squirm under the spotlight that Bartlett shines on them. They alternate between fascinating and frightening. They are people living on the fringes of society, intelligent misfits and outcasts dedicated to their causes and callings who view the paths they forge ahead as the only way forward. No doubt some of them are crazy, but readers won’t be able to shake the feeling that they may be “crazy as a fox.”

It would be easy to dismiss these radicals if they didn’t seem to constantly be on the cusp of what humanity potentially faces. What is it they know, or think they know, that the rest of us don’t? The answers may be surprising and the supporting data equally alarming. In a world where popular ideas are becoming more insular, radicals are the ones thinking outside the box. What’s more, they could very well be our best hope for the future.

“A liberal democracy with no radicals would atrophy and degenerate: society would become ossified, gripped by a dreary and monotonous set of unchallenged dogmas and received wisdoms that save people the trouble of thinking for themselves. This is precisely what has happened over the last thirty years. All the right words come out of the modern liberal’s mouth—listening to the people, human rights, democratic values, tolerance, etc.—but the brain isn’t properly engaged, it just auto-pilots through these platitudes.”

Most of us have been asleep at the wheel too long, lured into a false sense of security in a world that has the increasing potential to be turned on its head at any time. The radicals among us sense imminent danger and impending doom. The mainstream may not have the answers, so it’s society’s outsiders who try for more abstract solutions and do so on their own terms. A highly recommended read, Radicals Chasing Utopia could influence you to chase after some of these utopian organizations and ideas, or make you want to flee from them just the same.