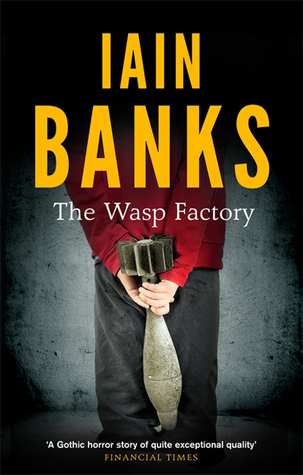 I finally got around to a book that is considered a modern classic by many. Trust me, my 3-star rating was a surprise to even myself.

The Wasp Factory had been on my radar for quite some time, a highly recommended novel from a celebrated writer that I just never seemed to get started on, always jockeying for position in my mile-high TBR pile. I'm often told it's a sure horse to bet on, so I finally made a point of reading it, and my expectations were high. By the end of the book those expectations weren't entirely met. Not by a long shot.

The Wasp Factory is the story of a mostly calm, collected, and vicious little teenager living on a small rural island outside a Scottish town. He lives with only his eccentric father (with which he has an odd relationship indeed) and has a older brother locked away in the nuthouse. When he's not killing/mutilating small animals or engaging in strange sadistic rituals he's conceived of, the lead character recounts his unconventional/tragic childhood and the three murders he committed in the past. Basically it boils down to the early life of a serial killer, although there is much more to it than that. The Wasp Factory deals with themes of isolation, intelligence, nature vs. nurture, insanity, violence, and the damaged minds that can result from broken homes.

For the most part I enjoyed The Wasp Factory. It's a good little story that takes you inside the alienation and thought processes of a young sociopath who does not view the world the way the rest of us do. However, I found huge potholes in the pacing that sidelined my reading of the book far too many times. Despite being an acclaimed writer, Ian Banks has a habit of writing these frequent long-winded passages overly describing some of the most painfully mundane shit (building dams, exploring the island, tinkering with all kinds of things) that prove to seriously hobble the story. There really is no need for them, like they were written merely to increase the final word-count. It's a chore to get through these pages with little to show for it, and any writing that feels like work without reward is something I take issue with. A few times the narrative felt tantamount to torture, so much fat on the prose that it barely lumbered along, highly surprising from a writer of such supposed talent. As I result, I found myself putting the book down for long periods, disinterested in returning to it.

But I did return and finish it, because at its core this novel is a little gem, though I stress it is rough around the edges (and in need of a polishing). Although I thought it was good, by the time I closed it I was quite happy to be done with The Wasp Factory. At the beginning I was sure I would love this book, but in the end I only ended up somewhat liking it. The novels I enjoy the most are those which I can't put down, and this was one I dropped more than a few times.

Buy 'The Wasp Factory' On Amazon