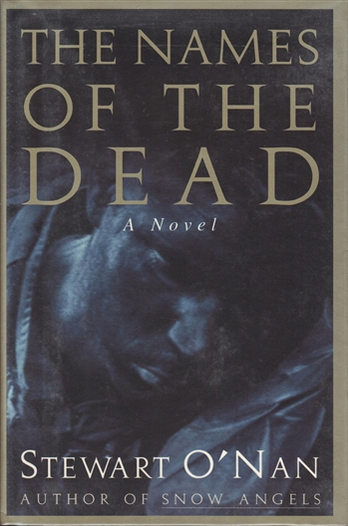 It's official. I've just finished reading a book that will now join the slim ranks of the 'greatest books I've ever read'. These books are collected on a special shelf placed above to my writing desk, and it is sparsely populated indeed... the novels require a particularly strong mix of skilled writing, compelling subject matter, intriguing plot, and slick storytelling.

Where to begin? How about this: If I could give 6 stars out of 5 to this novel I would.

I often say of a great book "I couldn't put it down!", but 99% of the time that's a worn out embellishment. 'The Names Of The Dead' was, in fact, a book I literally (not figuratively) could not put down. It's a whole other level, and on so many levels too.

For starters, Stewart O'Nan has to be one of the most talented, yet largely unrecognized, writers in America today. He's one of Stephen King's favorite authors, and that's saying something. But as far as writing talent goes they aren't even in the same ballpark. O'Nan crushes it past the stands, dinging cars in the lot outside the stadium. But like any of the arts disciplines, the true talent almost always gets overlooked while the big shiny celebrity shit gets all the attention from it's paid-for press paraded before every prospective reader's face. Stewart O'Nan has gained some popularity over the years, but nowhere near the amount he deserves. Certainly not enough to match his ability to tell a story. I've read other works of his, most notably 'The Speed Queen', and I was blown away by his prowess and power. Incredibly, 'The Names Of The Dead' topped it, hitting me with both barrels.

The story is something else. Set in Ithaca, New York, Larry Markham is a damaged Vietnam vet who is having increasing trouble at home, works a shitty day job delivering junk food, and oversees a support group for other injured veterans at the local hospital at nights. Trouble starts when a new veteran named Creeley joins the group. As an ex-soldier of the infamous 'Phoenix Program' (CIA sanctioned murder) Creeley apparently tried and failed to commit suicide by eating the barrel of his gun, and is missing a quarter of his head as a result. Needless to say, he's not thinking straight, but when he insists that he knows Larry from the war (right down to his platoon code name) the story gets real creepy real fast. When Creeley escapes the hospital and proves highly skilled/dangerous even without part of his brain, things go from bad to worse.

Larry's marriage woes, mixed with his strained relationship with his WWII vet father and the encounters with Creeley, dredge up memories of his tour as a nineteen year old army medic in America's worst clusterfuck of a war. The chapters alternate between his current life, and the one he left back in the jungle with his dead platoon. Larry is a haunted man, and what's worse, he has become a hunted one as well.

Ostensibly, 'The Names Of The Dead' is a thriller. But before the word 'genre' even enters your head, know that O'Nan puts literary writers to absolute shame. Alice McDermott had this to say about it:

I cannot stress how good this guy is, or how well-written the novel is too. The prose is tight and lean and lethal, compelling without a single shred of bullshit. At times it is brutal, and then unexpectedly beautiful. This is the refined work of a craftsman writer and master storyteller; a prime example of fiction writing at it's utmost best. It's also a grim reminder that some of the most incredible stories can somehow slip through the cracks and never gain their rightful place. I've now added Stewart O'Nan to my very short, very selective list of writing influences.

I urge you to take note of this one, and then take it to the top of your TBR pile.

Buy 'The Names Of The Dead' on Amazon Today!