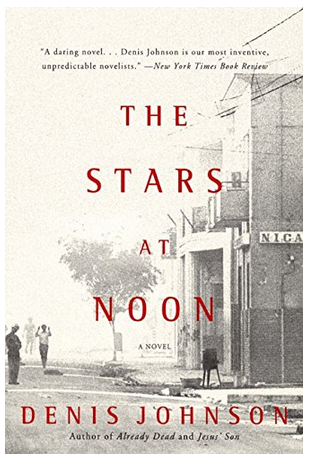 When you hear the name Denis Johnson, you inevitably think of Jesus’ Son, the book that put the man on the map. But ‘The Stars At Noon’ is another masterful work from a true talent that should not be missed.

This is a novel about being trapped out in the open; one American woman’s paranoid escape attempt from a corrupt country while she tries to stem the erosion of both her sanity and soul. Set in Nicaragua in the 1980s, we experience the story through the main character as she is allowed to exist within the country, but forbidden to exit it. Supposedly a correspondent, her actual background and reasons to be in Nicaragua appear shady at best, as are the majority of the people she comes in contact with. Her entrapment/abandonment starts subtly, but it isn’t long before she must try to flee using whatever means necessary: sex, manipulation, crime, bribery and beggary. The desperation and dismay feels so prominent on the page, it’s enough to make you want to avoid ever traveling to any region in the world that has an ounce of instability.

It’s no secret that Denis Johnson holds rank as one of the best writers in the business, and he delivers another compelling and unnerving piece of fiction that should be on everyone’s must-read list. ‘The Stars At Noon‘ is a walk in a frightened, yet cunning woman’s shoes. It makes for a thrilling and uncomfortable story about being stuck on foreign soil while being increasingly perceived as an enemy by people who are more than capable of killing you. The lengths we will go to when backed into a corner is a hard swallow, particularly when we all know it’s true.

Buy ‘The Stars At Noon‘ on Amazon Today!